THE SPECTACLE THAT IS YOSEMITE FIREFALL 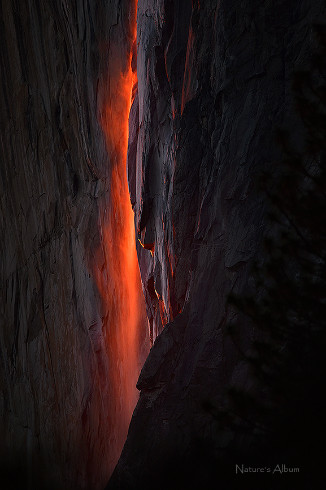 For around two weeks each year in the middle of February, when all the conditions come together just right, you get the spectacle that is known as Yosemite Firefall. When we say, all the conditions come together just right, we mean it. First, you have to start with a healthy dose of snowfall - check. Second, temperatures have to be warm enough to melt that snowfall in order to feed Horsetail Falls - check. Third, the western skies must be completely clear at sunset - check. Finally, the sun has to line up at the perfect angle with the falls at sunset - check. The result is a stunning optical illusion that turns the falls a deep crimson red, creating the illusion of fire or molten lava cascading down the slope of El Capitan.

Thanks in part to a very strong El Nino, Yosemite Firefall took place this year - the first time in four years and by some accounts the best showing of it in more than a decade. This image is coveted by nature photographers from across the globe and one we have been wanting to get for years. So, when the internet and social media exploded a little over a week ago with stunning images of the firefall, we felt fortunate to live close enough (if you consider an 11 to 12 hour drive in each direction close) that we could get there within the day. And though the internet and social media, in part, let us know that firefall was a go this year, in turn, it also let the rest of the world know. Enter the circus. 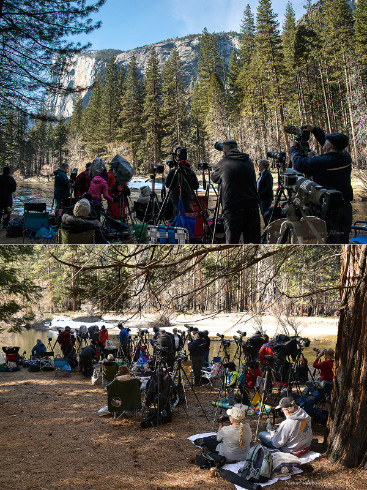 We arrived at horsetail falls at 1:30PM and were genuinely shocked at the amount of people already there. We knew there would be a lot of photographers and knew we would have to get there early to secure a good spot, but this ... this was rediculous! There were literally hundreds of people already in place, some having arrived as early as 5:30AM ... seriously?! We consider ourselves dedicated nature photographers, like drive 12 hours for one shot type of dedicated nature photographers, but this, this was like a circus. We have to admit while searching for the few good spots that were left, feeling somewhat disgusted by the human spectacle that a natural spectacle like this has become. Having said that, we also understand that like us, others want to experience that natural spectacle just as much as we do and have just as much right to. It's the digital age and it's just the way things are now - accept and move on.

With that, we settled in to our chosen spots and with that fulfilled the old adage, hurry up and wait ... and wait ... and wait. The photos above show only a small fraction of the amount of people that were already standing around us at 2PM. There were only so many spots with unobstructed views so we all gathered in tight pockets. From there, we quickly made nice with our nearest neighbors (the two in the bottom photo seated in the lower right of the frame) as we had a lot of time to kill. Fortunately, they were very nice (we even exchanged chocolate and cookies with one another) and also very interesting to get to know. By 4PM we were starting to feel a little less claustrophobic and a little more comfortable in our ever-crowded surroundings.

Finally the moment we had been patiently waiting for arrived! It was time to see if this big gamble we had taken was about to pay off! As the skies remained clear to the west, the lowering sun began to transform Horsetail Falls. It started with a platinum shade, then progressed through ever-deepening shades of yellow and gold and then ... our hearts sank!! The light just seemed to turn off. The rocks turned blue and the falls went to a pale shade of pink. Oh God, we thought, what's happening, where did the light go?! Not being able to see the sun at this point we weren't sure if there were clouds obstructing the light, thereby destroying our dream of seeing the final stage - the firefall!

Knowing it was still about ten minutes before the technical sunset time of 5:45PM, we waited, and hoped for a miracle. A few people declared with conviction, "It's over ...", packed up and left acting as thought the rest of us were idiots for continuing to stare blankly at the dull blue falls in front of us. We thought, hell with that! We drove all this way, overnight, and have stood here, with no nearby restrooms by the way, for four hours suffering from intermitten anxiety attacks over being more and more boxed in by ever-increasing hoards of people and wondering whether or not we made the right decision by coming in the first place ... we ARE NOT giving up the dream until we can no longer see our hand in front of our face ... PERIOD!!

As the rest of us stood there with bated breath, in total silence, we noticed the falls looked a little more pink.  We all wondered, am I making something out of nothing? Is this anything? Then, slowly, the pink began a transition into increasingly deeper shades of red. YES, YES ... the light was turning back on ... the falls turned blood red and the illusion of cascading lava was very real - it was Yosemite firefall!!! Amid the sounds of hundreds of shutters clicking all around, everything was muted in our ears. Blocking everyone else out, for just a short time, we were alone in this moment as we immersed ourselves in the awe-inspiring event playing out if front of us - mesmerizing, beautiful beyond description, no words ...

Then, just like that, the light was out again, this time for good. The crowd erupted in claps and cheers. Our gamble paid off and our dream was fulfilled, success! With time, we actually embraced the human spectacle and even enjoyed it a little. When the moment came we were still able to enjoy it just for ourselves. As we packed up and readied ourselves for the long drive home, we said our goodbyes to our new besties, a brother and sister from California with roots in Alaska and amazing stories to tell. Good people to spend a very special afternoon with!! 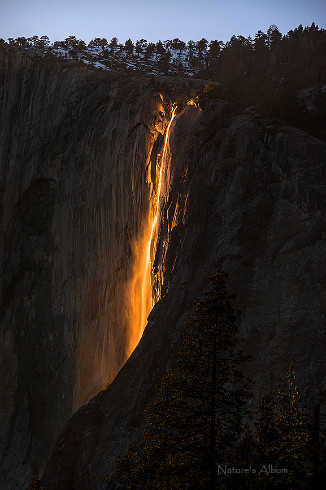